On 14 March 2014, on the occasion of the grand re-opening of the restored/renovated/expanded Pesti Vigadó, a group of civil citizens protested with an intervention against the handover of the institution to the MMA (Hungarian Academy of Arts).

The intervention was organised by a grassroots group (visual and performance artists, activists, art and art theory university students, university teachers, and some members of the group Free Artists). 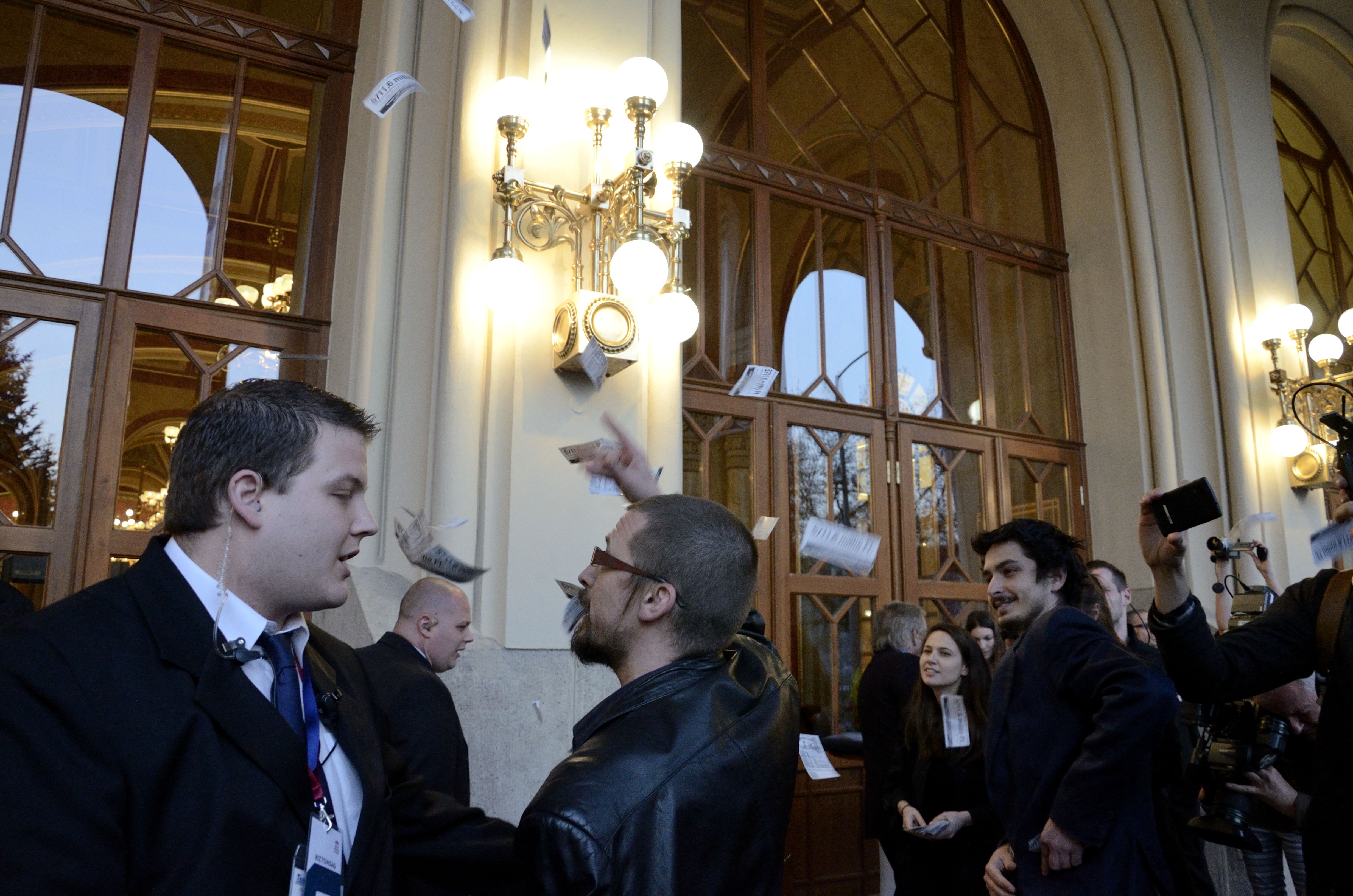 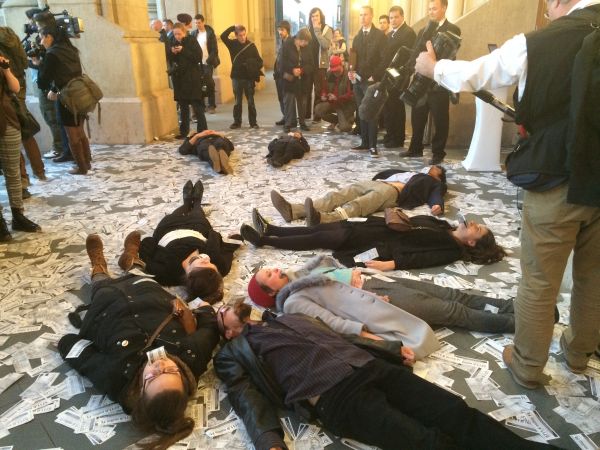 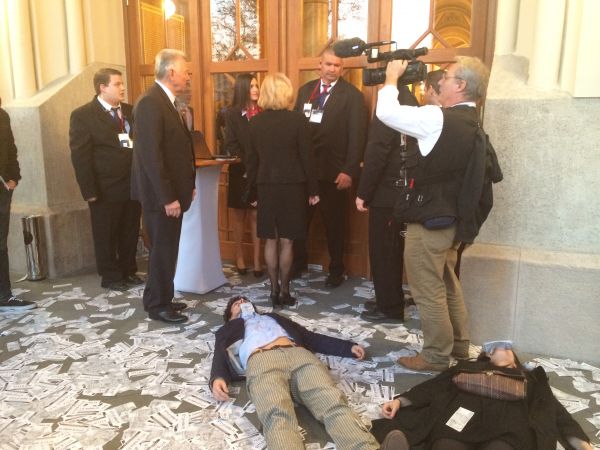 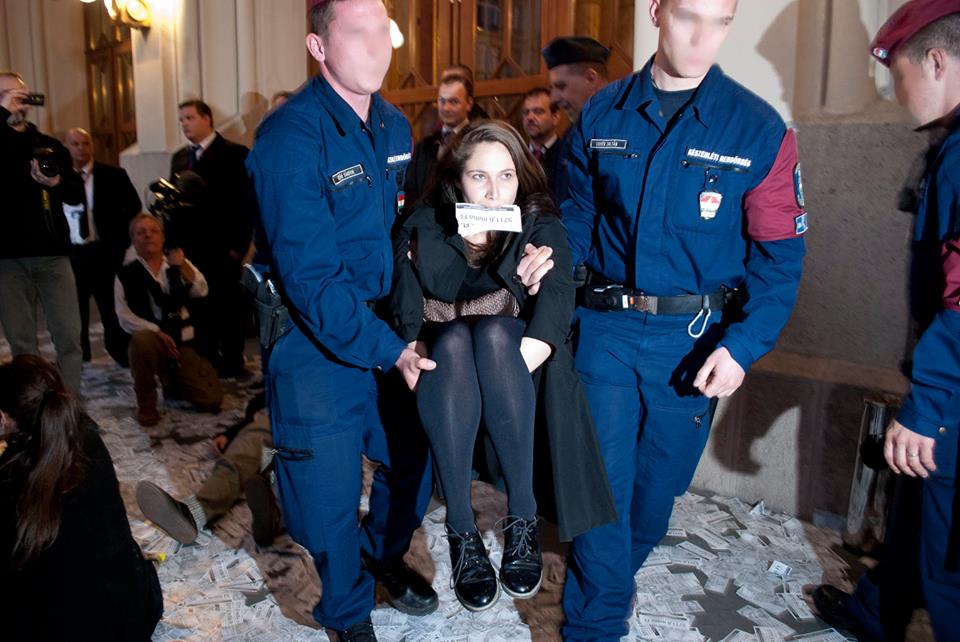 I’m here because I’ve been excluded from a public event, and so I protest with my presence the disproportionate power relations that stand in Hungarian culture and society.
I want to directly confront the members and supporters of the MMA with the illegitimacy and the exlusionist nature of the appropriation of these immense sums of public monies, with its cronyism and its social insensitivity.

The MMA is exclusionary – Culture is free!

In 2010, the second Orbán-government began to methodically undo the constitutional, democratic rule of law. Step by step, the pillars of the constitutional state were knocked down, and systematic institutional frameworks were destroyed. The only conceptually sound programme was developed to secure the legal background to an authoritarian regime. To serve this effective concentration of power, the government amended both written and unwritten rules of parliamentary legislation. The cultural sector is dominated by centralisation, cutbacks, and the establishment of a new system of dependence on the state.

By 2014, we are miles away from every attempt at creating and maintaining a form of state involvement that holds dialogue as a priority, that is based on solidarity, not on command and control, and that supports, not spoon-feeds.

One of the most outstanding examples of Orbán’s symbolic rule is the Pesti Vigadó concert and exhibition hall, which became the property of a fake civil organisation serving a clear ideological purpose. This organisation is discriminative, exclusionary, and can only define itself against other social groups, employing peculiar, offensive politics. Culture cannot be exclusionary, nor can it serve party politics, especially not in the centre of Europe, in a member state of the European Union.

We demand that the state maintain its responsibility over its public functions, and ceases to delegate the support and management of culture to government-friendly civil organisations!!!

Two quotations from the MMA:

Culture should not be the plaything of a small, civil clique serving an ideological purpose.

We have to end the unacceptable practice of using using civil funds and apportioning tax monies based on ideological grounds.

We have to end antagonism and exclusion, as these are not constructive, but detrimental; instead of creating value, they result in loss of value.

The concept of culture must be placed upon a new, democratic foundation, whose most important momentum is also the main reason for our protest today:

We demand that the Hungarian Academy of Arts is immediately removed from the Fundamental Law!!!

The Unite for Contemporary Art group and the Free Artists

Statement of the demonstration:
In April 2011, the Hungarian government included the Hungarian Academy of Arts (MMA), a civil organisation up until then, in the New Fundamental Law of Hungary:

“Hungary shall protect the scientific and artistic freedom of the Hungarian Academy of Sciences and the Hungarian Academy of Arts. Higher education institutions shall be autonomous in terms of the content and the methods of research and teaching; their organisation shall be regulated by an Act. The Government shall, within the framework of an Act, lay down the rules governing the management of public higher education institutions and shall supervise their management”.
This symbolic gesture, which is anti-democratic and violates certain basic constitutional rights, aims at creating a feudal structure within the cultural sector.

We – the Unite for Contemporary Art group and the Free Artists – are protesting right here, right now:

not for the re-partitioning of culture according to a different party politics, nor in order to belong to the current elite receiving the majority of funding,

but  for cultural diversity, for the wide accessability of culture, and for democratic rights.

Press and photos (HU only, sorry):