To Make a World, Part I: Ultranationalism and the Art of the Stateless State

Ultranationalism and the “Deep State”

There doesn’t seem to be a worse moment than the present to defend the project of stateless internationalism. The recent European elections of May 2014 showed the growing influence of ultranationalist parties on the political establishment; in terms of representation in the European Parliament, ultranationalist parties became the largest parties in France (National Front), Denmark (Danish People’s Party), and the United Kingdom (United Kingdom Independence Party), while gaining substantial ground in Austria (Freedom Party of Austria) and Sweden (Swedish Democrats), and remaining relatively stable in the Netherlands (Freedom Party). They suffered heavy losses in Belgium (Flemish Interest), but this was due to the success of a slightly more moderate and competing nationalist party (New Flemish Alliance).1 The next step for these ultranationalist parties has been to seek alliances and prepare to deliver the final blow to the supra-nationalist managerial project of the European Union. Their challenge is to convince EU parliamentarians from seven or more different countries to unite in order to, as Le Pen has said, make the EU “disappear and be replaced by a Europe of nations that are free and sovereign.”2 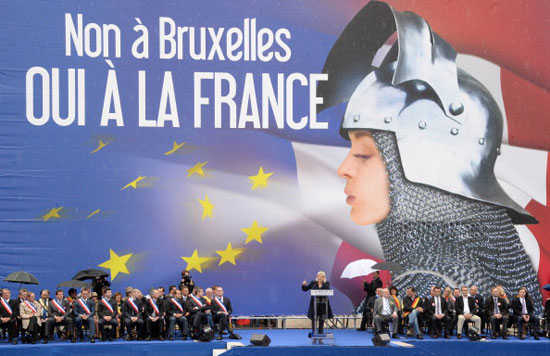 Marine Le Pen, leader of France’s far-right National Front (FN), delivers a speech in front of a poster depicting Joan of Arc and the slogan “No to Brussels, Yes to France” during a rally in Paris on May 1, 2014. Photo: AFP PHOTO / Pierre Andrieu.

The leaders of the ultranationalist parties seem to be in permanent competition to radicalize the discourse concerning immigration and failing economies, with the hope that their arguments will help reclaim national sovereignty from the EU. These arguments range from Marine Le Pen in France claiming that the Muslim community is the new anti-Semitic danger of the twenty-first century, to the Danish People’s Party declaring that Denmark should be kept “Danish for the Danish,” culturally as well as economically. Their main obstacle does not seem to be a strong international progressive counterforce, but rather their own incapacity to deal with each other’s extremisms, leading to two prominent, competing right-wing blocks. One block organized itself into a coalition called Europe of Freedom and Direct Democracy (which includes the UK Independence Party, the Swedish Democrats, and, to the surprise of many, the Italian comedian Beppe Grillo’s Five Star Movement), while the other block organized itself into the European Alliance for Freedom (which includes the National Front, the Freedom Party, and Lega Nord). The parties from both blocks attempted to collaborate, as this is the only way they could gain enough subsidies from the EU, but for now were unable to reach an agreement due to opposition against the anti-Semitic rhetoric of the National Front. This means that for now, the strength of the ultranationalists is limited to the UK Independence Party’s group.

This entry was posted in Art, Social Justice and Culture, EN. Bookmark the permalink.