How Did Hungary’s Election Become a Circus?

BUDAPEST — THE most visible poster on the streets here is not the one advertising the Deep Purple concert at the Papp Laszlo Sportarena. And it’s not the one for “Balkan Kobra,” a theatrical comedy featuring a stubbly hero sporting tight jeans and a Kalashnikov. And it’s definitely not the one for the Budapest Dance Festival.

Instead, it’s the one that shows three or four guys wearing neckties standing in a police lineup, alongside a clown. In one of the more ubiquitous versions of the poster, two of the men are former left-wing prime ministers of Hungary. A third is Attila Mesterhazy, president of the country’s Socialist Party and a current candidate for prime minister in the coming election in April. The fourth is Miklos Hagyo, the former left-wing deputy mayor of Budapest, who is currently the subject of a corruption trial.

The men, and the clown, appear above the slogan “They Don’t Deserve Another Chance.”

Given that political advertising has been sharply and abruptly curtailed by Prime Minister Viktor Orban and his ruling Fidesz Party, the pre-eminence of a political ad — on billboards, lampposts and the sides of buses — might seem surprising. But Fidesz, which has been widely criticized as taking Hungary in an autocratic direction since taking power in 2010, has become adept at controlling the message. It has rewritten the state’s Constitution, come to dominate all branches of government and held increasing sway over the news media. Meanwhile, according to the International Monetary Fund, Hungary’s economic output is not expected to return to 2008 levels until 2017. 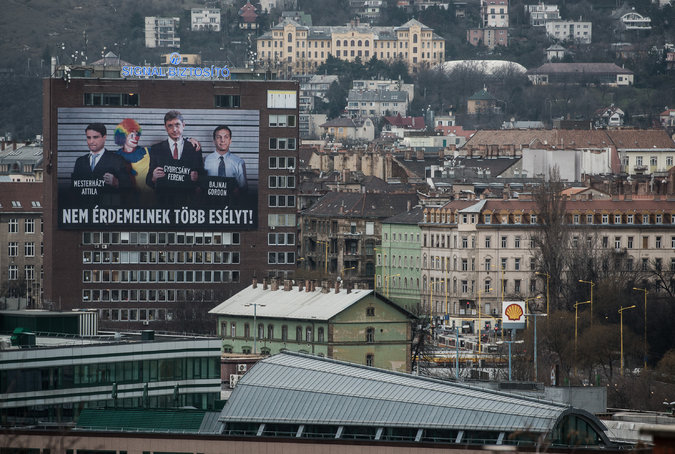 The outdoor-advertising restriction, however, does not apply to “independent” groups, notably the pro-Orban Civil Union Forum, which has been partly funded in the past by a Fidesz foundation and is behind the clown ad. The group has plastered the ad all over the capital and throughout the country.

This entry was posted in EN, political background - HU. Bookmark the permalink.