Andras Schiff: Why I won’t perform in Hungary 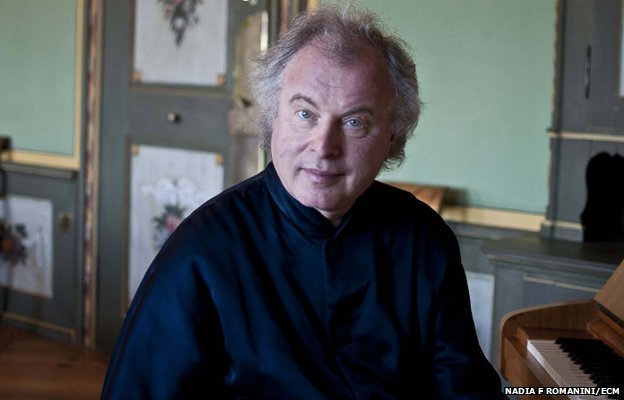 One of the world’s greatest pianists, Andras Schiff, played his 60th birthday concert on Saturday – a hugely demanding programme of the Goldberg Variations by Bach and Beethoven’s Diabelli Variations. Earlier he told the BBC’s Tim Franks why he gave the performance in London – and not in his homeland, Hungary.

Andras Schiff takes me aback even before our interview begins: he shakes my hand, firmly.

About 18 months ago, on the eve of the 2012 Tour de France, I was warned by a press officer not even to proffer my hand to Bradley Wiggins, before an interview at his Majorca training camp. Team Sky simply could not risk me bruising the hands that would grip the handlebars that would steer Britain to its first ever Tour victory.

At the time, I could not work out whether Wiggins’ entourage was being utterly precious or utterly reasonable. But I had subconsciously carried the memory of that meeting to my interview with one of the world’s most highly regarded pianists.

Schiff has walked to BBC headquarters by himself, from his home in central London – a small, unobtrusive figure in a hat and long black coat. As he gazes around the controlled frenzy of the office where radio news programmes are made, and down the glass shaft into the main newsroom below, he exudes an innocent interest, almost delight.

Schiff has been described as the greatest musician Hungary has produced since the composers Bela Bartok and Zoltan Kodaly, in the first half of the 20th Century. But between the artist and his homeland there has been a rupture.

“Unfortunately, things in Hungary are not very good, to put it mildly,” Schiff says. “I’m a great opponent of the political situation there now.”

This entry was posted in EN. Bookmark the permalink.