Posted on November 9, 2014 by ellenpolus

(Reuters) – Thousands of Hungarians demonstrated against alleged corruption at the country’s tax authority and for wider democratic freedoms in Budapest on Sunday in the latest protest to rock the country’s politics. 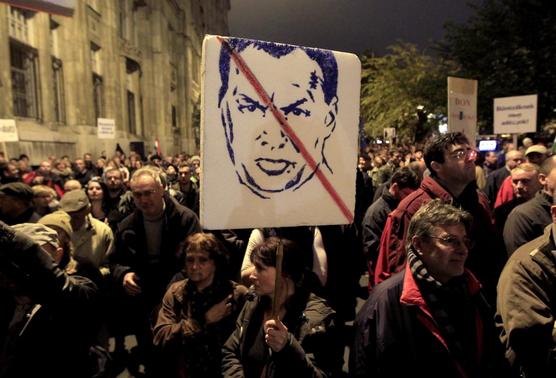 A woman carries a placard with the likeness of Hungary’s Prime Minister Viktor Orban as thousands of Hungarians protest against perceived corruption at the country’s tax authority and lack of wider democratic freedoms, in Budapest, November 9, 2014.

The protests against the populist centre-right government, notably against a planned tax on the Internet, show that despite a big majority in parliament, Prime Minister Viktor Orban faces increasingly vocal opposition from civil society.

Orban has raised eyebrows among Western partners, including the United States and the European Union, for policies that have penalized big businesses, limited democratic freedoms and – his critics say – pulled Hungary closer into the Kremlin’s orbit.
more: Reuters