Around 100,000 Hungarians rally for democracy as internet tax hits nerve

(Reuters) – (This Oct. 28 story corrects the first date in quote in eighth paragraph)

About 100,000 Hungarians rallied on Tuesday night to protest at a planned tax on data traffic and the broader course of Prime Minister Viktor Orban’s government they saw as undermining democracy and relations with European Union peers. 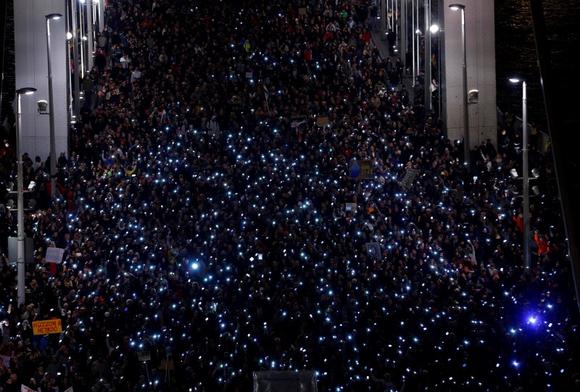 It was by far the largest protest since his center-right government took power in 2010 and pursued moves to redefine many walks of life, drawing accusations of creeping authoritarianism, although it was re-elected by a landslide this year.

Orban’s government has imposed special taxes on the banking, retail, energy and telecommunications sectors to keep the budget deficit in check, jeopardizing profits in some parts of the economy and unnerving international investors.

The Internet data levy idea was first floated in the 2015 tax code submitted to the Central European country’s parliament last week, triggering objections from Internet service providers and users who felt it was anti-democratic.
more: Reuters

Rally organisers said the move “follows a wave of alarming anti-democratic measures by Orban that is pushing Hungary even further adrift from Europe”.
BBC

After an initial protest on Sunday that drew about 10,000 people, the government said it would alter the proposal to cap the tax at 700 forint a month. The ceiling would apply to each Internet subscription, whether on computers, mobile devices or cable services.
The New York TImes

Protesters vowed to continue the rallies – which have also been held in several other cities in Hungary and at some Hungarian embassies in EU countries – until the government withdraws the tax plan.
TheGuardian

The people behind the protests, however, are evidently not among Orban’s supporters, as they were demanding his ouster during the latest rally. The crowd organized by a Facebook-based social network, which appeared to be composed of well-heeled professionals, marched through central Budapest carrying slogans like “How many times do you want to skin us?”

The tax has also triggered alarm in Brussels. Neelie Kroes, the EU’s digital chief, tweeted that it was “a shame for users and a shame for the Hungarian government”.
Orban’s Fidesz party later proposed capping the monthly payment at 700 forints (2.3 euros, $3) for consumers and 5,000 forints for businesses, but the move has failed to calm anger.
France24

Orban has been accused of leaning toward authoritarianism, and organizers told AFP they believed the tax was aimed at restricting government critics who mainly use online media.
TimesofIndia

This entry was posted in EN and tagged internetadó, protest, tiltakozás. Bookmark the permalink.