An intervention and audio installation by Szabolcs KissPál

The Hope is a temporary public audio-monument, which was produced in a collaborative way. 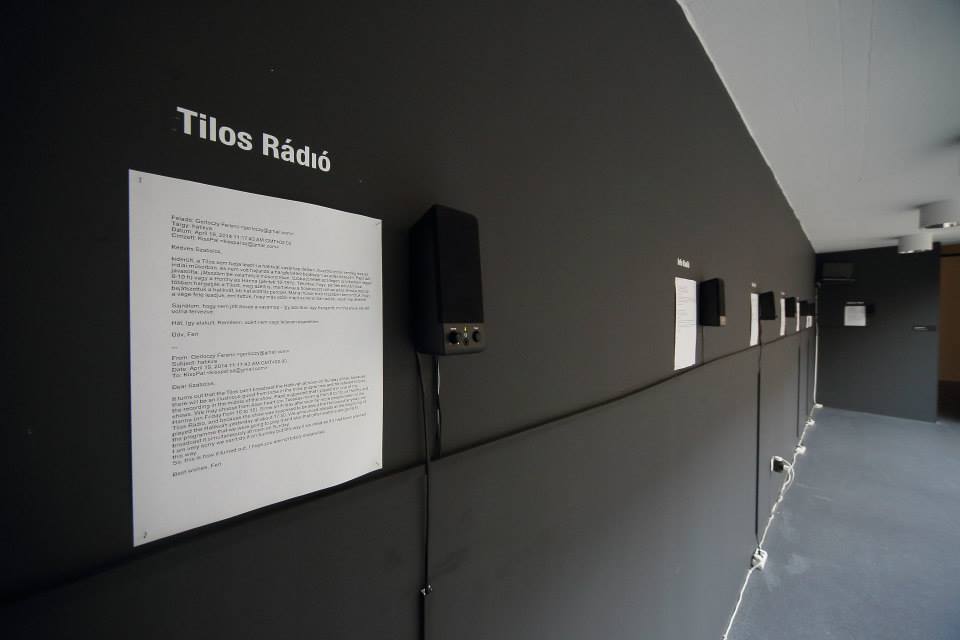 During the official Holocaust Memorial Year in Hungary (2014) I have sent a request of collaboration to 23 Hungarian radio stations in which I asked the editors in chief to broadcast on the same day, at the same time a special recording of the Hatikvah (a 19th century song, since 1897 the anthem of the Zionist Movement and since 1946 the national anthem of the state Israel) with the following text:

„(…) I would like to invite the station that you manage to cooperation as part of an art project, the result of which I plan to present as a sound installation entitled Hope (…).

The commemorations of the Holocaust memorial year 2014 are taking place this year in Hungary. The preparations of the series of celebrations—as could also be followed in the media—were accompanied by discussions and debates from which has been seen that in spite of their common language, culture and everyday worries, the citizens of Hungary do not share a common remembrance past, that they are not bound to each other by a responsible, dignified, considerate and honest recollection that takes into consideration the individual, family and community experiences of all citizens of the nation.

The citizens of Hungary do not form a community of memory.

The different groups of the Hungarian society are interpreting differently the historic events of the past, the grievances they suffered, the deprivation of their rights, their humiliation or even the gravity of their failures and sins. Since they do not share the memories of the past, they do not have the same present either, therefore the fragmentation of the community memory augments further, which cannot and will not be absolved by any political remembrance act practiced by the state.

The work I plan would like to reflect on this situation and it attempts to create an invisible monument, which gives us the chance to live the moments of live, shared memory if only for a few minutes. For this purpose I make an appeal to several Hungarian radio editorials to participate in the production of this audio-monument.

In the hope of cooperation, therefore, I would kindly ask you to broadcast the Hatikvah sung by survivors in 1945 during the Jewish worship held on the fifth day after the liberation of the Bergen-Belsen concentration camp – on the sixty-ninth anniversary of the recording at 12:00 pm on April 20, 2014.”

I left up to the editors to decide upon the content of the introductory text they will use.

Because of the various socio-political controversies around the celebration only two stations (Civil Radio, Klub Radio) joined the project by broadcasting the song in time, two stations broadcasted it at different hours (Tilos Radio, MR1 State Radio – this latter practically expropriating the project), the rest of the stations either reacted negatively with various excuses, or didn’t reply at all.

I recorded a four minutes sequence of the broadcasted content on the given day and time of all of the stations I contacted previously, and I have chosen 8 of them which are played simultaneously and synchronized in the installation.

Below you can read some of the e-mail reactions of the stations.

Dear Mr KissPál,
Thank you for the opportunity you offer but being a news radio we cannot take it. We do not broadcast any music on our radio, not even as promos.
We read the news every quarter-hour and the other programmes deal also with events from the public life, politics and economy in form of short reports.

Dear Szabolcs KissPál,
Unfortunately it is impossible for us to support your project within Music FM.
We wish you success in the realization of the project.

Dear Szabolcs KissPál,
Thank you for appealing to us, we feel obliged. I read the material and listened to the recording.
This event is so far away from us, so it does not fit among the topics of our radio, which deals with news from Budaörs and its surroundings.
Also the quality of the recording is so noisy and bad, that it would be impossible for us to use it in this format. I think that the material should be improved by a sound technician so that the radios can broadcast it.

Dear Mr. Szabolcs KissPál,
Thank you for your appeal and that you have addresed us.
Since its foundation our radio considers it extremely important to consistently present the universal human basic values that are also represented by the Catholic Church. As a result, our programmes regularly contain objective presentations of atrocities committed as an assault against the human dignity of anyone, anytime and anywhere.
We commemorate the memorial day of the victims of the Hungarian Holocaust this year also on April 16. In this programme it is not excluded that we would use the recording in question. On the date and time indicated by you we broadcast the prayer The Angelus and the daily gospel. These are the core program elements of the Catholic Radio the time of which we cannot change.
We wish you the best for the exhibition and future work.

(On the day mentioned the material was not transmitted and there was no response to any subsequent appeals.)

Dear Szabolcs,
The answer to your question is Yes.
The only thing we hope you have taken into consideration – although it does not change the decision, it is only a bit disturbing – is that this is on Easter Sunday. But I’m sure we can manage this thing somehow.
About the conversation in my show before the transmission I decided that your speech would worth more no the days prior to the event, so I plan to invite you to Radio Klub for April 17 in the morning. I hope you can come in person, which would be more elegant after all.
We would further contact you for the details!

Dear Szabolcs,
It turns out that the Tilos can’t broadcast the Hatikvah at noon on Sunday either, because there will be an illustrious guest from India in the India programme and he refused to play the recording in the middle of the show. Papó suggested that I played it in one of my shows. We may choose from Alien heart (on Tuesday morning from 8 to 10) or Honthy and Hanna (on Friday from 16 to 18). Since on Friday afternoon far more people listen to the Tilos Radio, and because the show was supposed to be about the Holocaust anyway, we played the Hatikvah yesterday at about 17:50. We announced already at the beginning of the programme that we were going to play it and also that other stations are going to broadcast it simultaneously at noon on Sunday.
I am very sorry we can’t do it on Sunday but this way it sounded as if it had been planned this way.
So, this is how it turned out. I hope you are not totally dissatisfied.

Dear Szabolcs KissPál,
Naturally, we would gladly cooperate in the art event. We will play the recording at noon on April 20.
Some kind of prologue would be necessary in our opinion, though. What do you think about that? Do you have any suggestions, ideas or thoughts that are worth mentioning?

Dear Szabolcs KissPál,
Presently I am on leave but I read your interesting project proposal. At the beginning of next week I will ckeck it in details and answer you whether the Radio Bartók can participate or not.
In the meantime, let me ask you how do the broadcasting on April 20 and the sound installation in Pécs are connected? (Naturally the transmission on the radio of the 1.5 minutes long recording has to be accompanied by a short explanation.)

Dear XXX,
Thank you for your quick response. About your questions:
– I plan to make simultaneously audible the audio material that was broadcasted (depending on any decision they made) by all of the radio stations I asked to participate in a separate, undivided, shared space of the exhibition. In the same space there will be exhibited the letter of request, the list of the radio stations that were asked to participate and the written reason of the stations, which although reacted, decided not to get involved in the project.
– The manner in which the recording is introduced I leave to the editorial staffs.
I am gratefully looking forward to your answer
Szabolcs KissPál

I got no response on my mail, but on April 16 2014, as part of a feature of the Radio Kossuth, with a short introductory text, without mentioning my name and request, the recording was broadcasted, and a few minutes later I received the following mail.:

Dear Mr. Szabolcs KissPál,
We sincerely thank you for your letter!
We also consider it important to commemorate worthily the victims in the Memorial Year of the Holocaust. At the same time we would like to make the moral lessons of the history our nation more easily recognisable and more feasible through the specific tools of the radio. This is why, like in previous years, on the memorial day of the victims of the Hungarian Holocaust the contents of many programmes on the channels of the Hungarian Radio will connect to the Memorial Day: selections of documents, interviews, portraits, etc. During the compilation of the programme for the day our colleagues also got interested in the BBC audio-document you recommended, which recorded the Hatikvah sung by the survivors at the ceremony held in the Bergen-Belsen concentration camp in 1945.

We share your opinion that the presentation of this recording can contribute to the strengthening of the nation’s collective memory. The Memorial Day of the victims of the Hungarian Holocaust serves as a worthy opportunity for this purpose. The recording was broadcasted on April 16 as part of a feature on the Radio Kossuth prior to the news, between 13:57 and 14h.