Vigorous Flagging in the Heart of Europe: The Hungarian Homeland under the Right-Wing Regime 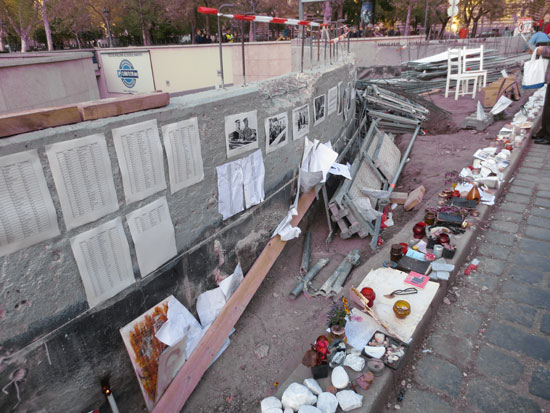 Nationalism is not just in Hungary’s backyard, it is in every corner of the house from the basement to the roof. It gets inside with the air and has completely soaked through the orifices of the building: the front door, the windows, the chimney, the front yard. For this reason, Kriszta Nagy, a Hungarian painter who exhibited her work last spring at Godot Gallery in Budapest, feels she has no other option than to paint the leader of Hungary on bedsheets and tablecloths. She explains the reason for her fifty-seven Pop portraits of Viktor Orbán: “The prime minister sleeps in our bed. He is on our tablecloth.”

Nationhood is constantly and vigorously flagged: national symbols are everywhere. Even protesters and activists opposing the regime’s politics feel a pressing need to take back the national symbols—currently appropriated for official use—because those not regarded as Hungarian enough are excluded from the notion of the nation. Among other tools used for building nationhood, the reproduction of the nation’s visual culture is constantly recruited. Hungary’s authoritarian regime, with its centralized, highly controlled system, is replicated in the administration of the arts. It is hard to grasp this complex and overwhelming phenomenon.

Flagging Nationhood in Everything Sacred and Profane

After reconfiguring electoral rules in favor of reelection, and pursuing an aggressive, populist campaign amidst apathy, the right-wing regime won the Hungarian election on April 6, 2014. Now, it is finalizing what it began building in the previous mandate. According to the party’s program, this can be condensed to just a single sentence: “We continue.” Concerning the arts, the goal is to achieve a traditional, conservative, Christian culture, conveying a historically rooted image of a strong and proud Hungary. Fidesz, the ruling party in Hungary, used this image on its billboards for the European Parliament elections. The message “We are sending word to Brussels: Hungarians demand respect” stood beside the portrait of the prime minister—the same portrait that is replicated fifty-seven times in Kriszta Nagy’s paintings. Victor Orbán regards the EU as a colonizing power. “Bravely” talking back to the colonizer is presented as the main task of the charismatic leader of a nation that is the heart of Europe. The idea is to project an image of a tough, resistant nation-state within the EU, using EU money, with the attitude of the heroic outlaw who robs from the rich and gives to the poor. In reality, the meaning is slightly, but crucially, altered from the fairytale version: “To rob from the external rich and give to the internal rich.”

Funded by European money, the newly inaugurated football stadium and the Puskás Ferenc Football Academy are literally in the backyard of the leader’s residence in his hometown of Felcsút.2 They are emblems of the current cultural politics, which prioritizes sports, especially football, at the expense of the arts and education. “Politicians can, when waving the national flag, advocate sporting policies, so that the flag-waving of sport itself becomes another flag to be waved”—thus states Michael Billig, who coined the term “banal nationalism” to indicate that nationalism is not removed from everyday life, but is constantly flagged through banal habits.3 According to Billig, this is how the phenomenon is omnipresent in Western, affluent countries. He points to sports and its relation to masculinity as some of the habits that enable the established nations of the West to be reproduced.