The Rise of a Fallen Feather: The Symbolism of the Turul Bird in Contemporary Hungary

The powerful reappearance of the Turul bird in Hungary has become one of the key signifiers of the new national self-definition of the country’s right and far right. The symbol is rooted in mystical and romantic historiography, which are the main tools for constructing the current national identity and its historical mission in Europe and the world. 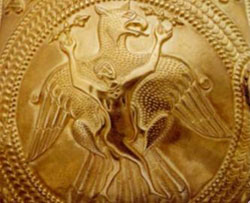 The earliest known representation of the Turul bird on one of the vessels found among the Treasure of Nagyszentmiklós. Its origins and age are still debated, but it probably dates from the Avar Khaganate, sixth to seventh century CE.

According to researchers, the cult of the Turul is based on the totemistic relationship between the nomadic Hungarian tribes and the Saker Falcon, a hunting bird of the Central Asian steppe. The Turul as a symbol is present in two main narratives from ancient Hungarian legend. The first is “Emese’s Dream,” in which the progenitress of the Hungarian people is impregnated by a Turul and gives birth to the Árpád Clan, which ruled Hungary during the country’s golden age, from the tenth to the thirteen century CE.1 The second narrative is “The Conquest of the Magyars” (“Honfoglalás”), which concerns the territorial legitimation of the Hungarian state. In this story, Turuls led a group of wandering tribes into the Carpathian basin, showing them the land of their future country. 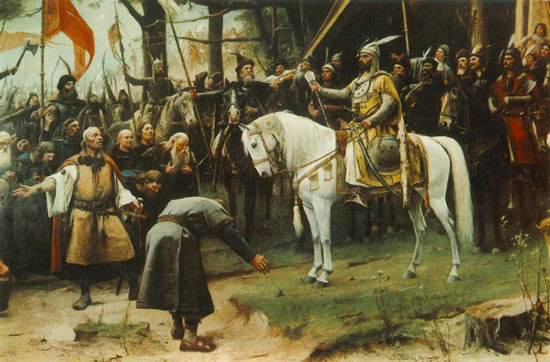 Above: The fifty forint coin with the regular and the temporary designs commemorating the 125th anniversary of the Hungarian Red Cross. Below: Mihály Munkácsy, Honfoglalás (Conquest of the Magyars), 1893. Detail of painting. Note the Turul feather in Árpád’s helmet.

The Symbolic and the Legal

In 2004, the Hungarian parliament passed a resolution affirming the national symbolic value of many animal breeds native to Hungary.2 Although the Saker Falcon isn’t among the more than one hundred species traditionally bred by Hungarians, in 2006 its temporary replacement on one side of the fifty forint coin by a different design generated anger on the far right, even though this depiction didn’t resemble the historic icon of the Turul. “Turul” was also briefly considered as a possible name for a new Hungarian currency introduced in 1926 (authorities ultimately chose the name “pengő”).3 Ironically, it was an EU-supported LIFE grant that led to the successful resettlement of the species in the region between 2006 and 2010.4 In 2013, a bill introduced into the Hungarian parliament by seven MPs of the radical right Jobbik party would have imposed a one-year prison sentence on anyone caught defacing images of the Turul or the Miraculous Deer, another important figure in the Hungarian ethnogenetic myth.5 Although the bill did not pass, if it were reintroduced today, it might pass easily, as Jobbik itself has presided over the new parliament’s cultural committee since April 2014.

The symbol of the Hungarian National Socialist Workers Party, transformed following its prohibition in 1933. Notice the Turul on top.

The story of a memorial depicting a Turul that was erected in the 12th district of Budapest in 2008 is symptomatic of the changing symbolism of the Turul. The board entitled to decide upon the issue ruled against the construction of the memorial. In spite of this, the local mayor, a member of the conservative Fidesz party, green-lighted the project.6 As Gábor Demszky, a well-known liberal politician, noted, “The Turul … became the symbol of unauthorized construction and of official authority that disregards its own rules.”7 Thus, the populist ethos of the “freedom fighter” was implicitly introduced. This later became the main metaphor of Viktor Orbán’s “rebellious” relationship to EU norms and standards: in defense of the new national self, the authoritarian handling of laws is acceptable. 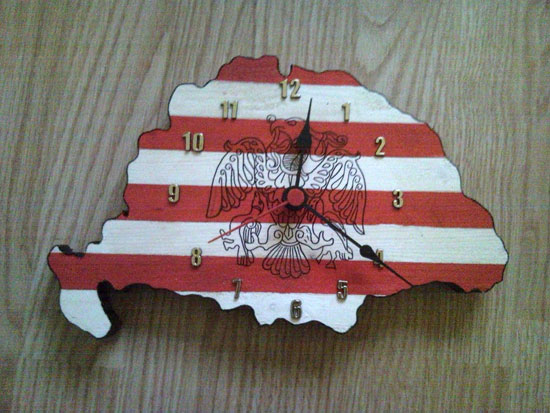 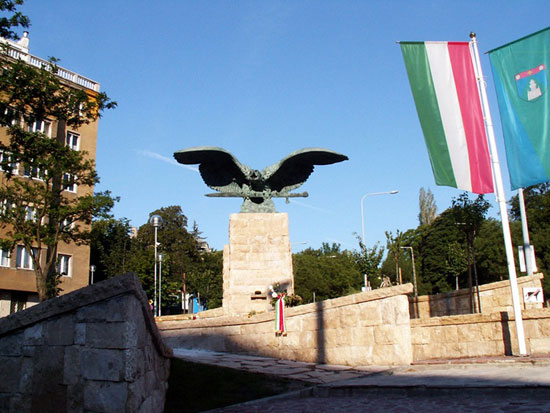 Above: Wall clock in the shape of Greater Hungary with Árpád stripes. From an online shop. Source: fegeto.blogspot.com. Below: The monument commemorating the military and civilian victims of WWII, 2008. Source: 12.kerulet.ittlakunk.hu.